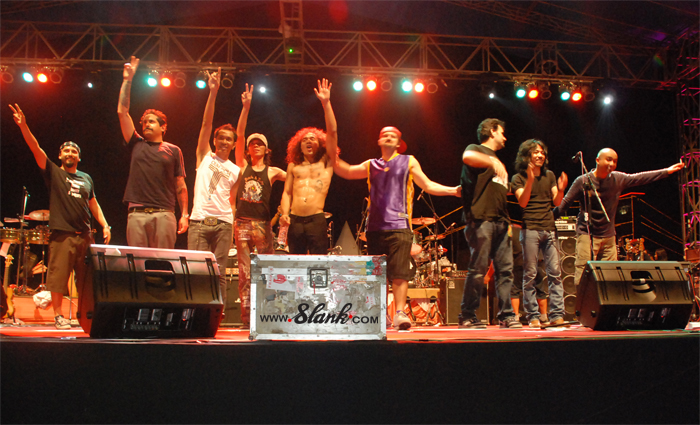 From The Underwater to Ozomatli (14 November 2008)

The show in Rochester – New York four days ago was awesome, it was the first time we play withot any Indonesian among the audience, but we were happy as a Slanker from Canada was come to see us.  Randie is a bass player of Dearest band. they were attending Soundrenaline in Indonesia a few times. The most surprising is that Randie has a big tattoo read BIDADARI PENYELAMAT (SAVIOUR ANGEL) which is the name of our Slank Fans Club’s Security Guards. Randie came with the guitar player and the drummer of Dearest band.

They drove straight from Toronto, Canada to Rochester for 2.5 hours just to see Slank’s Concert. In the festival, Slank was on the fourth row out of seven band. The audience was hipnotized at first, they were quiet but listening. They claps and crazily shouts after each song, but when the third song played they start to jump like crazy. We played 7 songs at the event. The Shows ended by Quietdrive – their hits in Indonesia is Time After Time – with a recycled 80’s Cyndi Lauper’s song. * Windy City, Chicago* From Rochester we went to Chicago, about 9 hour drive with the bus. When we arrived at the so called Windy City, we were welcomed by the Indonesian Consulate people there, they took us to lunch. In the home town of Al Capone and Obama, Slank performed at Reggies Rock Live.

This is the las town with The Underwater. This time they become our opening act, cause truly there always be more Slankers then The Underwater fans that came to see the shows. Damn right, even the cold windy and raining that night, Slankers were kept coming to see the shows. *Dangdut at Chico* The day after we flew to Chico, California to join Ozomatli. After 3.5 hours flight, we landed at Sacramento, around 1.5 hours drive from Chico. Our tour bus is ready to fetch us in Sacramento, the same bus company – Taylor Tours Inc. – that we used in the US east coasts. When we arrived at Chico and park just behind Ozomatli’s bus, Wildog – Ozomatli bass player – burst in to greet Slank and said.”Hey remember me…? I’m ‘Anjing'”.

[NOTE: Anjing = “dog” in english but also a curse word in Indonesia] Of course everyone are laughing. Ozomatli and Slank was on the same stage back in Palembang earlier this year on Visit Musi Year event held by the Palembang government together with US Embassy in Indonesia. That night, again Slank performed in front of around 400 audiences and again there were no Indonesians attending the show. At this place the audiences enthusiasm was a lot better, the applause was awesome every time Slank finished playing their song, and this time SLANK played Anthem For The Broken Hearted (the English version of Orkes Sakit Hati). In the middle of the song, Kaka bring a Latina gal to do a ‘dangdut’ dance together. The show is getting hot. The girl, Kristina Vargas, said as a Hispanic girl she love to dance, so there was no problem to follow the dance of Anthem For The Broken Hearted. Ozomatli is a hip hop latin rock band, so most of the fans are Latin Americans. Lake Tahoe, 14 November 2008